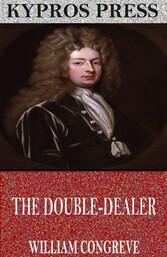 William Congreve was a highly influential English playwright and poet.Congreve is generally credited for shaping the English comedy of manners through his sharp satirical wit.  Congreve's popular plays include The Way of the World, Love for Love, and The Mourning Bride.
The Double-Dealer is a comedy that tells the story of Mellefont, the nephew and heir of Lord Touchwood, who is engaged to a woman named Cynthia.  Lord Touchwood's wife is madly in love with Mellefont and tries to ruin the match.