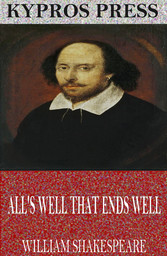 William Shakespeare is widely considered to have been the greatest writer in the English language and the world's greatest dramatist.  More than 400 years after Shakespeare's death, his plays are still performed more than any other playwright and have been translated into every major language in the world.  This edition of All's Well That Ends Well includes a table of contents.