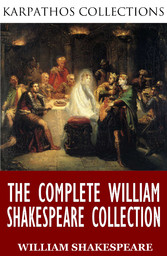 Karpathos publishes the greatest works of history's greatest authors and collects them to make it easy and affordable for readers to have them all at the push of a button.  All of our collections include a linked table of contents.
William Shakespeare is widely considered to have been the greatest writer in the English language and the world's greatest dramatist.  More than 400 years after Shakespeare's death, his plays are still performed more than any other playwright and have been translated into every major language in the world.  Whether it be Shakespeare's tragedies, comedies, or histories, it is difficult not to immediately recognize his work and almost all students worldwide will have read some of his classics.This collection includes the following:
COMEDIES:
All's Well That Ends Well
As You Like It
The Comedy of Errors
Cymbeline
Love's Labour's Lost
Measure for Measure
The Merry Wives of Windsor
The Merchant of Venice
A Midsummer Night's Dream
Much Ado About Nothing
Pericles, Prince of Tyre
The Taming of the Shrew
The Tempest
Troilus and Cressida
Twelfth Night
Two Gentlemen of Verona
The Winter's Tale

POETRY:
Shakespeare's 154 Sonnets
A Lover's Complaint
The Rape of Lucrece
Venus and Adonis
A Funeral Elegy for Master William Peter