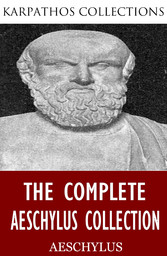 Karpathos publishes the greatest works of history's greatest authors and collects them to make it easy and affordable for readers to have them all at the push of a button.  All of our collections include a linked table of contents.
Aeschylus was one of the few ancient Greek tragedians whose plays have survived.Aeschylus preceded Sophocles and Euripides which makes him the first of the tragedians on record.The Oresteia Trilogy is Aeschylus' most famous work.This collection includes the following:
SURVIVING PLAYS:
The Persians
The Seven Against Thebes
The Suppliants
The Oresteia Trilogy:
Agamemnon
The Libation Bearers
The Eumenides
Prometheus Bound