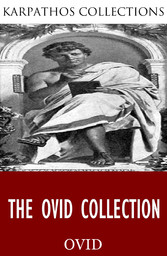 The Story of Phaeton

And with a milder gleam refresh’d the sight;

The matter vied not with the sculptor’s thought,

For in the portal was display’d on high

(The work of Vulcan) a fictitious sky;

And Gods and Goddesses the waters grac’d.

Triton, and Proteus (the deceiving God)

With Doris here were carv’d, and all her train,

Some loosely swimming in the figur’d main,

While some on rocks their dropping hair divide,

And some on fishes through the waters glide:

Tho’ various features did the sisters grace,

A sister’s likeness was in ev’ry face.

On Earth a diff’rent landskip courts the eyes,

And nymphs, and streams, and woods, and rural deities.

On either gate were six engraven signs.

To his suspected father’s palace went,

’Till pressing forward through the bright abode,

He saw at distance the illustrious God:

He saw at distance, or the dazling light

Had flash’d too strongly on his aking sight.

The God sits high, exalted on a throne

Of blazing gems, with purple garments on;

The Hours, in order rang’d on either hand,

And Days, and Months, and Years, and Ages stand.

And hoary Winter shivers in the reer.

Phoebus beheld the youth from off his throne;

That eye, which looks on all, was fix’d in one.

He saw the boy’s confusion in his face,

Surpriz’d at all the wonders of the place;

And cries aloud, “What wants my son? for know

My son thou art, and I must call thee so.”

“Light of the world,” the trembling youth replies,

“Illustrious parent! since you don’t despise

The parent’s name, some certain token give,

That I may Clymene’s proud boast believe,

Nor longer under false reproaches grieve.”

The tender sire was touch’d with what he said,

And flung the blaze of glories from his head,

And bid the youth advance: “My son,” said he,

“Come to thy father’s arms! for Clymene

Has told thee true; a parent’s name I own,

And deem thee worthy to be called my son.

As a sure proof, make some request, and I,

Whate’er it be, with that request comply;

By Styx I swear, whose waves are hid in night,

And roul impervious to my piercing sight.”

The youth transported, asks, without delay,

To guide the sun’s bright chariot for a day.

The God repented of the oath he took,

For anguish thrice his radiant head he shook;

“My son,” says he, “some other proof require,

Rash was my promise, rash is thy desire.

I’d fain deny this wish, which thou hast made,

Or, what I can’t deny, wou’d fain disswade.

Too vast and hazardous the task appears,

Nor suited to thy strength, nor to thy years.

Thy lot is mortal, but thy wishes fly

Beyond the province of mortality:

There is not one of all the Gods that dares

(However skill’d in other great affairs)

To mount the burning axle-tree, but I;

Not Jove himself, the ruler of the sky,

Dares try his strength: yet who so strong as Jove?

The steeds climb up the first ascent with pain,

And when the middle firmament they gain,

If downward from the Heav’ns my head I bow,

And see the Earth and Ocean hang below,

Ev’n I am seiz’d with horror and affright,

And my own heart misgives me at the sight.

And steddy reins must curb the horses’ rage.

Tethys herself has fear’d to see me driv’n

Down headlong from the precipice of Heav’n.

Besides, consider what impetuous force

Turns stars and planets in a diff’rent course.

I steer against their motions; nor am I

Born back by all the current of the sky.

But how cou’d you resist the orbs that roul

In adverse whirls, and stem the rapid pole?

But you perhaps may hope for pleasing woods,

And stately dooms, and cities fill’d with Gods;

While through a thousand snares your progress lies,

Where forms of starry monsters stock the skies:

For, shou’d you hit the doubtful way aright,

The bull with stooping horns stands opposite;

Next him the bright Haemonian bow is strung,

And next, the lion’s grinning visage hung:

And here the crab’s in lesser clasps are bent.

Nor wou’d you find it easie to compose

The mettled steeds, when from their nostrils flows

The scorching fire, that in their entrails glows.

When they grow warm and restif to the rein.

Let not my son a fatal gift require,

But, O! in time, recall your rash desire;

You ask a gift that may your parent tell,

Let these my fears your parentage reveal;

And learn a father from a father’s care:

Look on my face; or if my heart lay bare,

Cou’d you but look, you’d read the father there.

Chuse out a gift from seas, or Earth, or skies,

For open to your wish all Nature lies,

Only decline this one unequal task,

For ’tis a mischief, not a gift, you ask.

You ask a real mischief, Phaeton:

Nay hang not thus about my neck, my son:

I grant your wish, and Styx has heard my voice,

Chuse what you will, but make a wiser choice.”

But he still longs to travel through the skies.

When the fond father (for in vain he pleads)

At length to the Vulcanian Chariot leads.

A golden axle did the work uphold,

Gold was the beam, the wheels were orb’d with gold.

The spokes in rows of silver pleas’d the sight,

The seat with party-colour’d gems was bright;

Apollo shin’d amid the glare of light.

The youth with secret joy the work surveys,

When now the moon disclos’d her purple rays;

The stars were fled, for Lucifer had chased

The stars away, and fled himself at last.

Soon as the father saw the rosy morn,

And the moon shining with a blunter horn,

He bid the nimble Hours, without delay,

Bring forth the steeds; the nimble Hours obey:

From their full racks the gen’rous steeds retire,

Still anxious for his son, the God of day,

To make him proof against the burning ray,

His temples with celestial ointment wet,

Of sov’reign virtue to repel the heat;

Then fix’d the beamy circle on his head,

And fetch’d a deep foreboding sigh, and said,

“Take this at least, this last advice, my son,

Keep a stiff rein, and move but gently on:

The coursers of themselves will run too fast,

Your art must be to moderate their haste.

Drive ’em not on directly through the skies,

But where the Zodiac’s winding circle lies,

Along the midmost Zone; but sally forth

Nor to the distant south, nor stormy north.

The horses’ hoofs a beaten track will show,

But neither mount too high, nor sink too low.

That no new fires, or Heav’n or Earth infest;

Keep the mid way, the middle way is best.

Nor, where in radiant folds the serpent twines,

Direct your course, nor where the altar shines.

And better for thee than thy self provide!

See, while I speak, the shades disperse away,

Aurora gives the promise of a day;

I’m call’d, nor can I make a longer stay.

Snatch up the reins; or still th’ attempt forsake,

And not my chariot, but my counsel, take,