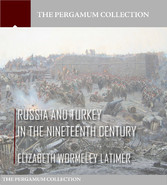 Russia and Turkey in the Nineteenth Century

Russia and Turkey in the Nineteenth Century

Somebody has said of Russia that it is the most extraordinary country on the globe, in the four most important particulars of empire: its history, its extent, its population, and its power. It has risen into importance only since the early part of the last century, and ever since it began to rise it has been the cause of continual alarm to Western Europe. All international efforts have been directed toward thwarting its schemes of aggression, and to the repression of its “manifest destiny,” yet it has held the balance of power in its hands in almost every crisis of modern European history.

Peter the Great, who flourished at the close of the seventeenth century, and in the dawn of the eighteenth, was not the reformer or restorer of Russia, he was its creator. He found it Asiatic, he left it European,—a work for which Panslavist fanatics at the present day are by no means grateful.

In the days of the Vikings Russia had been more or less connected with the Norsemen. Its chief kingdom, whose seat of empire was at Novgorod, was a settlement of Northmen, whence Harold Hardrada (killed in England, 1066, three weeks before the battle of Hastings) brought home to Norway Elizabeth, its king’s daughter, as his bride.

The kingdom of Novgorod was overturned by invading Tartars, and little more was heard in Europe of Muscovy until in the sixteenth century, when Captain Sir Richard Chancelor, seeking the Northeastern Passage, wandered into the White Sea, and was thence conducted to the barbaric court of Ivan the Terrible. That formidable monarch received Chancelor at Moscow, “seated on a very royal throne,” having upon his head a diadem of gold; “his robe was all of goldsmith’s work,” in his hand “he bore a crystal sceptre, garnished and beset with precious stones, and his countenance was no less full of majesty.” Upon one side of his throne stood his chief scrivener, and upon the other the great “commander of silence,” or court usher, in costly dresses of cloth of gold. Around the chamber were seated his council of one hundred and fifty noblemen, “upon high seats, all clad as richly.”

Having presented letters from King Edward VI., which were received most graciously, Chancelor and his officers were invited to dine with the Czar. The English captain seems to have been much impressed by the profusion of gold and silver plate displayed on the occasion, and especially by four mighty flagons nearly two yards high, wrought on the top with elegant devices of towers and dragons’ heads. The servants were arrayed in habits of gold, but the guests wore white linen; and the Czar twice changed his crown during the banquet.

Still more magnificent was Ivan’s entertainment on Christmas Day, 1559, of another English guest, who came as an ambassador from Queen Elizabeth, and who was much astonished at seeing twelve massive barrels made of silver and hooped with fine gold, each containing twelve gallons of wine. Ivan was a second Nero, full of promise in his youth, but after he reached full age crazed by the responsibilities of absolute power.

In 1568 Elizabeth despatched her favorite diplomatist, Sir Thomas Randolph to the Russian court. His mission was to negotiate a commercial treaty and to soften her refusal of the Czar’s offer of marriage, that potentate having been added to the list of her Majesty’s cajoled and rejected suitors.

After that Russia sank back into the obscurity of barbarism for one hundred years.

Early in the seventeenth century, the race of sovereigns to which Ivan belonged having become extinct in the male line, the House of Romanoff, which claimed royal descent through females, ascended the throne. The first sovereign of that dynasty, named Michael, was elected “by an assembly of the States,” and crowned July 13, 1613,—that is, two years after King James’s Bible was first printed, and three years before Shakespeare died.

The next Romanoff was Alexis. The son of Alexis was Peter the Great, who after being harassed by various conspiracies, and sharing for a few years his throne with Ivan, his elder brother, became Emperor and Autocrat of all the Russias. That title had been assumed by Ivan I. in 1340 as Grand Prince of the various provinces called Russias, which though governed by their own dukes, and their own laws, paid tribute, and owed fealty to the Grand Prince of Muscovy.

We are all familiar with the history of Peter the Great. We know how he travelled that he might return home and instruct his people; how he learned ship-building in Holland; how he visited England,—where William III. requested Mr. Evelyn to lend his house, and garden of rare herbs, to his semi-civilized guest; how Peter’s amusement was to be wheeled through the trim hedges in a wheelbarrow; how he returned to Russia; how he founded a navy, conquered Livonia, reclaimed a swamp in it, and built St. Petersburg; how he humbled Charles of Sweden; how he acquired all the Baltic Provinces; and how, dying in 1725 at the age of fifty-three, he left his throne to Catherine his peasant wife, having previously named their son Peter as her heir. Peter was not his oldest son. A year before his accession, when he was seventeen, he had married his first wife, a noble Russian lady, Eudoxia Lapuchin, by whom he had had one son named Alexis. Eudoxia he divorced, but she survived him. Alexis was brought up with neither love nor care. Catherine had naturally no affection for her step-son, and was ambitious to make her own son Peter his father’s heir. The customs of Russia at that day gave a father absolute power over the life of his child. The Grand Duke Alexis, neglected and unhappy, led probably an irregular life; at any rate he drew down upon himself the displeasure of his father, who ordered him either to reform, or to retire into a monastery. After trying for six months to conform to his father’s wishes, Alexis made his escape to Vienna. He was soon, however, forced to return to Russia. There the higher clergy, the chief officers of state, and the leading nobles were convened at Moscow to try him. Alexis acknowledged himself unworthy to wear the crown, but entreated that his life might be spared. His trial was followed by his confinement in a prison and by the nomination of Catherine as her husband’s successor.

Alexis was not left in peace in his imprisonment. His father employed every means to extract from him the names of his confidants and advisors. For five months he was subjected to constant interrogations; at last his father pronounced him worthy of death, and the next day he was found murdered. The father suffered pangs of remorse for this act in his later years. When he died he left his throne, as I have said, to Catherine, who had unbounded influence over him.

Peter, their son, had died before his father, and Catherine, who reigned only two years, exercised the prerogative of a Russian sovereign, namely, that of choosing a successor, by leaving her crown to Peter II., son of the unfortunate Alexis. He was a lad of thirteen, and after the death of her own child, she had shown him kindness, and interested herself in his education. Peter lived only two years after ascending the throne; and then followed a strange entanglement of succession. The Russian nobles, passing over the two daughters of Peter the Great (Anna, who had married a duke of Holstein, and Elizabeth) offered their crown to the widowed Duchess of Courland, Anna Ivanovna, daughter of Peter’s elder brother. At her death she left it to Ivan IV., son of her niece Anne, who had married Prince Antoine Ulrich of Brunswick. But Elizabeth, daughter of Peter the Great and of Catherine, easily effected a coup d’état, imprisoned Ivan and his parents, and reigned till 1762. She made no legitimate marriage, though she was probably married secretly to a young Cossack whom she raised to many dignities, Alexis Razumoffsky. She adopted as her successor Peter, the son of her sister Anna and the Prince of Holstein Gottorp. She caused him to be brought up at the Russian court and married him to the penniless Princess Sophia Augusta of Anhalt-Zerbst. This lady, who on her baptism into the Greek Church took the name of Catherine, was a woman of extraordinary vigor, ambition, and ability. When Peter began to ill-treat her she made short work of so feeble a husband. She forced him to abdicate, and then suffered him, after his abdication, to be poisoned in a few hours. She is known in Russian history as Catherine II., or Catherine the Great. She applied a strong coating of French varnish to Russian barbarism. She was noted for her many lovers, for her wars with Frederick the Great, and also with the Turks in the Crimea; but most of all for her share in the partition of Poland, a country whose great misfortune it has been to have no natural boundaries.

Catherine had had one son by her husband Peter, the Grand Duke Paul. She kept him, as long as she lived, in a state of servile tutelage, even taking from him his children as soon as they were weaned, and bringing them up under her own eye.

Paul’s first wife died very young, and he was then married to the Princess Dorothea of Montbelliard, a tiny principality in the east of France, shut in between the Vosges and Jura Mountains. No sweeter princess ever lived than Princess Dorothea, who, on her baptism into the Greek Church, took the name of Marie Feodorovna. Madame d’ Oberkirch was her dearest friend, and has left a...