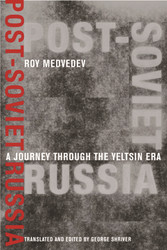 Post-Soviet Russia - A Journey Through the Yeltsin Era

Post-Soviet Russia - A Journey Through the Yeltsin Era

Roy Medvedev, a historian and political activist, was a member of the Soviet parliament from 1989 to 1991. He is the author of numerous books, including Khrushchev: The Years in Power; On Soviet Dissent; The October Revolution; and Let History Judge: The Origins and Consequences of Stalinism.George Shriver has translated and edited several books, including Let History Judge, The October Revolution, and Gorbachev: On My Country and the World (Columbia).