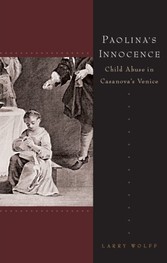 In the summer of 1785, in the city of Venice, a wealthy 60-year-old man was arrested and accused of a scandalous offense: having sexual relations with the 8-year-old daughter of an impoverished laundress. Although the sexual abuse of children was probably not uncommon in early modern Europe, it is largely undocumented, and the concept of &quote,child abuse&quote, did not yet exist. The case of Paolina Lozaro and Gaetano Franceschini came before Venice's unusual blasphemy tribunal, the Bestemmia, which heard testimony from an entire neighborhood-from the parish priest to the madam of the local brothel. Paolina's Innocence considers Franceschini's conduct in the context of the libertinism of Casanova and also employs other prominent contemporaries-Jean-Jacques Rousseau, Carlo Goldoni, Lorenzo Da Ponte, Cesare Beccaria, and the Marquis de Sade-as points of reference for understanding the case and broader issues of libertinism, sexual crime, childhood, and child abuse in the 18th century.