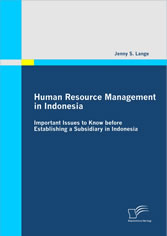 Indonesia, with over 240 million people and rich of natural resources and abundant human resources, is very attractive for investors operating in wide array of industries.
Many reports on Human Resource Management (HRM) and the English journals have written about the developing countries in Europe, Africa, and Asia (countries such as Hong Kong, China, and India), but surprisingly, writing on HRM issues in Indonesia has been rare and mainly limited to labor economics and macro-level Human Resources Development. Therefore, this thesis intends to make a contribution to literatures of HRM issues in Indonesia, with the example for German companies which are establishing their subsidiaries in Indonesia.
This book examines Human Resource Management Issues in Indonesia from environment context such as political, economical, socio-cultural, technological, environmental and legal perspective (PESTEL Analysis), culture dimension difference between Indonesia and Germany, and the current issues of managing human resources in Indonesia by firms, especially for multinational companies, such as issues of general condition of labors, recruitment and selection process, compensation appraisal, performance management, trade unions and gender.
Regarding HRM issues, the study has also shown that foreign companies have many threats, if they establish their subsidiaries in Indonesia. But on the other hand, Indonesia has some strengths and already improved some essential sectors that should be considered as opportunities for foreign companies, such as abundance in labors, rich natural resources, good international relationships, increasing foreign trades and FDI, growing telecommunication development, and starts improving national education and health.
As conclusion, the HRM issues for foreign companies establishing a subsidiary in Indonesia are very complex, especially due to environment aspects and culture dimension difference. However, through understanding culture dimension of Indonesian societies, use the opportunities and minimize the risks, managing people in Indonesia is not an impossible mission.