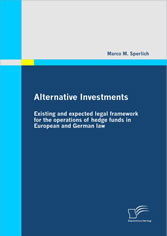 During the last 15 years the hedge fund industry has become one of the most creative and rapid growing areas within the financial industry and has made it hard for regulators to mitigate the potential risks posed to investors and the financial system.
In light of the financial crisis, international interest in the supervision and regulation of the financial industry has increased rapidly, particularly with regard to hedge funds and there is no doubt that international and European initiatives will influence hedge fund operations in European and German law.
The aim of this thesis is to introduce the reader from a legal perspective to the general characteristics of hedge funds as well as the existing and expected legal schemes for the operations of hedge funds in European and German law.
The thesis explains the characteristics of hedge fund schemes by describing their origin and terms of hedge funds used. In general, the reader will be introduced to the European and German legal landscape as well as to market participants in the hedge funds business by analysing applicable German law as well the practability of existing EU Directives and Regulations. Furthermore a brief summary of the financial supervisory framework will be presented as well as the role of hedge fund associations.
The reader will also find a chapter analyzing and describing the proposed Directive for Alternative Investment Fund Managers (AIFM) by following its table of contents resulting in a comparative summary on expected European regulation and possible impacts to German law.
Finally, I highlight two conclusions. First on the proposed AIFM Directive, which is still in draft, and therefore a statement of political intent, has no binding effect and I expect that the proposed regulations encompassed in the Directive will evolve significantly prior to the passage of new legislation due to lobbying by hedge fund associations and the United Kingdom (UK) government.
The second conclusion is that Germany is already prepared to provide a regulatory framework for the operations of hedge funds in the context of the AIFM Directive. Also, existing hedge fund providers in Germany are already able to provide the required regulatory infrastructures when entering or offering hedge funds business in Germany, which could result in a competitive advantage to other EU Member States.