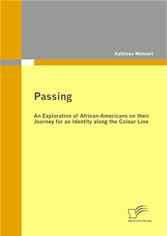 Larsen and other African-American writers, including James Weldon Johnson, explored the intricacies and contradictions of the concept of race at the beginning of the 20th century, in particular by addressing the phenomenon of ´passing´. Passing has many definitions, most often it is associated with the term ´passing for white´, which implies the crossing of the colour line from black to white in order to transcend racial barriers. Until the end of the 19th and beginning of the 20th century, writers hardly had addressed the passing figure in literature. Passing has always been a much camouflaged topic because the successful passer does not want their identity to be uncloaked. This constitutes probably also the main reason why only little, and rather pioneering, research has been conducted up to today and why it still remains difficult to investigate the issue. The sole witnesses of the concepts of passing in the time period are passing narratives. James Weldon Johnson?s Autobiography of an Ex-colored Man (1912), Nella Larsen?s Quicksand (1928) and her novella Passing (1929) are perhaps the most exemplary examples of an analysis of the passing figure and classic epitomes of the racial situations during the Harlem Renaissance. The novels challenge stereotypes of race and disclose concepts of doubleness and visibility. In order to disentangle the complexities of the theme, these novels, will serve to examine in depth in the nature and the motifs of the phenomenon of passing. In this book, I will be exploring the motifs of passing in these novels of the Harlem Renaissance in the context of DuBois? concept of double consciousness and the discourse of race. Chapter One will set the critical historical and cultural context for the passing narratives, as this is indispensable and crucial for the understanding of the motifs of the theme. With this in mind, the second Chapter will account for what destabilizes the African-American identity and thus identify the motives of passing. It will explore how external factors like legislation as well as extremely influential social taboos affect the mulatto protagonists and what influencing variable double consciousness, as an internal factor, plays. In quest for a stable and fulfilling identity, African Americans travel along the colour line and pass into different roles for a life outside the veil without restrictions. In Chapter Three, I will therefore analyse passing as an attempt to escape the confines of race and double consciousness and will also pay special attention to the motif of travel. At this point, I will in particular explore the question whether the journey of Larsen?s and Johnson?s passing figures fulfils its promise of a stable or even new form of identity. The concluding Chapter will critically reflect on the subject of passing and its potential to challenge racial categorization and boundaries. I will analyse whether passing proves a successful strategy to refrain from social restrictions and double consciousness and whether concepts like that of DuBois? third self are promising for a stable identity. This final Chapter will incorporate a conclusion in which I will look behind the veil of the phenomenon and explore the ways in which passing defies the essentialism of the discussions of race.