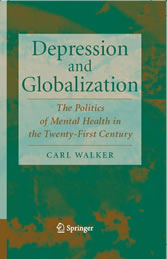 This is an important academic text on the political aspects of depression, specifically the relationship between globalization and depression. The text Walker reestablishes the link between mental health research and treatment, along with the political and economical influences outside the world of academic and clinical mental health. Overall, this book accomplishes the task of how closely and inextricably linked these diverse fields are and the way they operate together to produce not only a cultural representation of mental illness but influence the extent and type of mental distress in the 21st century.


Dr. Carl Walker is a post-doctoral fellow based in the department of Mental Health Sciences at the University College-London. Dr. Walker currently manages a European-wide, EC-funded four year research project involving the identifcation risk factors for future episodes of depression for use in a General Practice context.
In addition, Dr. Walker reviews papers for Psychology and Health and books for the Royal Society for the Promotion of Health.