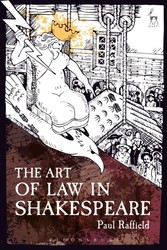 Art of Law in Shakespeare

Art of Law in Shakespeare

Through an examination of five plays by Shakespeare, Paul Raffield analyses the contiguous development of common law and poetic drama during the first decade of Jacobean rule. The broad premise of The Art of Law in Shakespeare is that the 'artificial reason' of law was a complex art form that shared the same rhetorical strategy as the plays of Shakespeare. Common law and Shakespearean drama of this period employed various aesthetic devices to capture the imagination and the emotional attachment of their respective audiences. Common law of the Jacobean era, as spoken in the law courts, learnt at the Inns of Court and recorded in the law reports, used imagery that would have been familiar to audiences of Shakespeare's plays. In its juridical form, English law was intrinsically dramatic, its adversarial mode of expression being founded on an agonistic model. Conversely, Shakespeare borrowed from the common law some of its most critical themes: justice, legitimacy, sovereignty, community, fairness, and (above all else) humanity. Each chapter investigates a particular aspect of the common law, seen through the lens of a specific play by Shakespeare. Topics include the unprecedented significance of rhetorical skills to the practice and learning of common law (Love's Labour's Lost), the early modern treason trial as exemplar of the theatre of law (Macbeth), the art of law as the legitimate distillation of the law of nature (The Winter's Tale), the efforts of common lawyers to create an image of nationhood from both classical and Judeo-Christian mythography (Cymbeline), and the theatrical device of the island as microcosm of the Jacobean state and the project of imperial expansion (The Tempest).