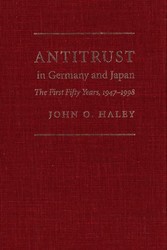 Antitrust in Germany and Japan presents an innovative, comparative analysis of the development and enforcement of two antitrust regimes, illustrating how each was shaped by American occupation strategies and policies following World War II. First imposed in 1947, the antitrust controls in Germany and Japan were the worlds first outside the United States. Those enacted in Japan continue in force, whereas in Germany, following a decade of debate, the occupation legislation was superseded in 1975 by the Law Against Restraints of Competition.This study explores the ironies and errors that led to the enactment of the German and Japanese statutes and emphasizes the unexpected degree of convergence that has occurred during the past fifty years through amendment and practice. It compares in detail the institutional structure and processes for the enforcement of antitrust controls as well as the system of remedies and sanctions available under each statute. It notes the debates in Germany and Japan over the effectiveness of statutes, particularly the still timely debate in 1970s Germany over a proposal for criminal sanctions.Antitrust in Germany and Japan reveals many unexpected and controversial similarities between the two antitrust regimes and demonstrates the extent to which American policy toward Germany determined American policy in Japan not only during presurrender planning but also throughout the occupation. It also challenges the prevailing view of the relative strength of antitrust controls in Germany relative to the weakness of antitrust in Japan.This book will be of interest to corporate lawyers as well as to legal historians and scholars of political economy.