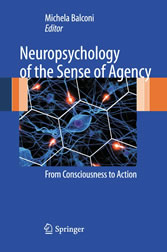 Neuropsychology of the Sense of Agency - From Consciousness to Action

Neuropsychology of the Sense of Agency - From Consciousness to Action

Not nothing without you but not the same Erich Fried (1979) How do I know that I am the person who is moving? The neuroscience of action has identified specific cognitive processes that allow the organism to refer the cause or origin of an action to its agent. This sense of agency has been defined as the sense that I am the one who is causing or generating an action or a certain thought in my stream of consciousness. As such, one can distinguish actions that are self-generated from those generated by others, giving rise to the experience of a self-other disti- tion in the domain of action. A tentative list of the features distinguishing the concept of agency includes awareness of a goal, of an intention to act, and of initiation of action; awareness of movements; a sense of activity, of mental effort, and of control; and the concept of authorship. However, it remains unclear how these various aspects of action and agency are related, to what extent they are dissociable, and whether some are more basic than others. Their sources remain to be specified and their relationship to action specification and action control mechanism is as yet unknown.