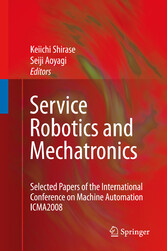 In a world suffering from an ageing population and declining birth rate, service robotics and mechatronics have an increasingly vital role to play in maintaining a safe and sustainable environment for everyone. Mechatronics can be used in the reconstruction or restoration of various environments which we rely upon to survive; for example the reconstruction of a city after an earthquake, or the restoration of polluted waters

This collection of papers was originally presented at the 7th International Conference on Machine Automation, 2008, in Awaji, Japan, and covers a variety of new trends in service robotics and mechatronics.

Service Robotics and Mechatronics showcases the latest research in the area to provide researchers and scientists with an up-to-date source of knowledge and basis for further study, as well as offering graduate students valuable reference material.