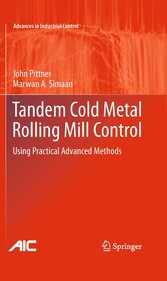 This book deals with a novel and practical advanced method for control of tandem cold metal rolling processes based on the emerging state-dependent Riccati equation technique. After a short history of tandem cold rolling, various types of cold rolling processes are described. A basic mathematical model of the process is discussed, and the diverse conventional control methods are compared. A detailed treatment of the theoretical and practical aspects of the state-dependent algebraic Riccati equation technique is given, with specific details of the new procedure described and results of simulations performed to verify the control model and overall system performance with the new controller coupled to the process model included. These results and data derived from actual operating mills are compared showing the improvements in performance using the new method. Material is included which shows how the new technique can be extended to the control of a broad range of large-scale complex nonlinear processes.


The authors of the book together have a combined experience of over 30 years in the control of metal processing areas, including tandem rolling applications. Dr. Pittner has over 20 years experience in the development, design, and commissioning of the control of these processes in both a national and international context. In addition he has presented many related papers on the theoretical and practical aspects of the control of tandem cold metal rolling at various technical conferences and has contributed papers which are published in several archival journals. Professor Simaan likewise has a wide background in the control of both steel and aluminum processes and is recognized internationally for his superior expertise in optimal control. He has published extensively on the control of various areas of metal processing which include tandem hot and cold rolling applications. With these backgrounds the authors are highly qualified and appreciative of what issues are encountered in the various facets of control development, design and commissioning and how the proposed material can significantly improve the performance of the tandem cold rolling process, as well as being an aid to the associated personnel in both a theoretical and practical sense. Moreover, they recognize not only the importance of the new technique for control of tandem cold rolling, but also the significance of its broader impacts which include the potential for improvement in the control of other large-scale nonlinear processes.