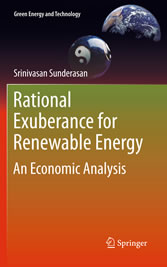 Rational Exuberance for Renewable Energy is a beyond-the-hype account of the underlying issues that encourage or plague widespread dissemination of renewable energy (RE) technologies.  Renewable energy operates in the real world, and it cannot be assumed that the conventional theories and incentive structures of economics and business do not apply.  The author argues that grants and subsidies could be provided to support research, development and technology improvement efforts, but should not be employed as an instrument of state policy to intervene in specific markets.  It is important to recognize that although investors often demonstrate an appetite for market risk, they find technology risks and policy uncertainty much less appealing.
Rational Exuberance for Renewable Energy blends classical economic theory with the everyday realities of the RE industry to identify incentive structures contributing to the success - or otherwise - of project implementation involving renewable sources and appropriate technologies. The book is a compilation of articles that analyze individual RE technologies, and offer multiple perspectives of the RE industry and markets.
Rational Exuberance for Renewable Energy is intended for policy makers, advanced students of energy economics and sustainable development, and for potential mainstream investors.


Dr. Srinivasan Sunderasan possesses diverse experience in project management, fund and portfolio management and leadership in multicultural environments. He is currently an economist with Verdurous Solutions, a consultancy and investment advisory organisation focusing on renewable energy and other 'cleantech' ventures (http://www.verdurous.in). He has authored about 20 research papers in areas covering renewable energy markets, policy, financing, microfinance, externality valuation, etc. He has also authored an application-oriented book on project finance under the title Long Term Investments: Project Planning and Appraisal. His biography has been included in three consecutive editions of the Marquis Who's Who in the World, New Jersey, for the years 2008 - 2010. The International Biographical Centre, Cambridge, UK, has featured his profile among the Outstanding Intellectuals of the 21st Century, 2009 / 2010.

Dr. Sunderasan has been awarded a doctoral degree in Business Economics by the University of Vienna, Austria, for his work on Mainstreaming Renewable Energy. He has also undertaken graduate course work in Economics at the University of Vienna. His first degree in Civil Engineering was followed by a masters degree in Business Administration from King Fahd University of Petroleum & Minerals, Dhahran, Saudi Arabia. He has pursued graduate course work in architecture and has acquired a graduate qualification in Environmental Law at the National Law School of India University, Bangalore.