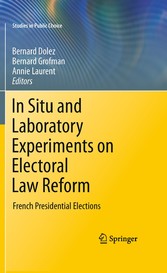 In the modern era, representation is the hallmark of democracy, and electoral rules structure how representation works and how effectively governments perform. Moreover, of the key structural variables in constitutional design, it is the choice of electoral system that is usually the most open to change. There are three distinctive approaches to electoral system research. One, associated largely with economics, involves the study of electoral system effects through the deductive method, using mathematical tools to derive theorems about the properties of voting methods and behaviors. A second, associated largely with political science, has a primarily empirical focus, and looks in depth at how electoral rules impact on political outcomes, through large cross-sectional or case studies. A third, and more recent tradition, inspired largely by work in experimental economics, involves experimentation, either in the form of controlled laboratory experiments or in the form of in situ field studies. This volume employs the third approach to report on experiments that look at alternatives to the present two round (majority runoff) system used for the election of French presidents. This system is of considerable importance not just because of its use in France but also because of its wide adoption in presidential elections in new democracies, such as Bulgaria, Poland, Romania, Russia and Ukraine. The editors have assembled the top experimental economists and political scientists specializing in French politics to provide in-depth analysis of the double ballot electoral system, and, more broadly, of the effect of electoral rules on the number of candidates, voter strategies, and ideological choice. Ultimately, the editors and contributors argue that experimental methods have great potential to inform our understanding of institutional mechanisms in the context of voting behavior.