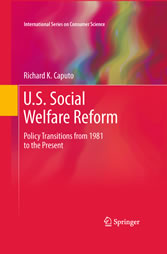 U.S. Social Welfare Reform - Policy Transitions from 1981 to the Present

U.S. Social Welfare Reform - Policy Transitions from 1981 to the Present

U. S. Social Welfare Reform examines pivotal changes in social welfare for low-income families in the United States between 1981, the advent of the Reagan administration, and 2008, the end of the G.W. Bush administration. It focuses on the change from the Federal-state open entitlement Aid to Families with Dependent Children (AFDC) program to the time-limited state run Temporary Assistance to Needy Families (TANF) program which Congress authorized with passage of the Personal Responsibility and Work Opportunity Act of 1996. The book also focuses on the development of the Earned Income Tax Credit (EITC) program, enacted in 1975 against the backdrop of failed efforts to nationalize AFDC which aimed at providing a basic income to all poor families, but which blossomed with continued bipartisan support in the 1990s. This book also explores alternative strategies to assist low-income families, including job training programs. It present original research on the educational and economic well-being of youth from low-income families who participated in government sponsored job training programs in the late 1970 and early 1980s.

The book seeks a middle ground between general and technical social policy texts. It provides more depth than is available in the more general social policy texts. Further, while the more comprehensive texts often rely on government documents and reports relying on Current Population Survey data to profile program use, this book relies on panel data from the National Longitudinal Surveys and presents original research that builds upon prior related research and scholarship about the role of the federal government in social welfare provisioning in general and AFDC/TANF and EITC use in particular and on school-to-work transition programs. It presents related technical material in a narrative style better suited to professionals and policy makers who may lack expertise in quantitative analysis.


Richard K. Caputo, Ph.D. has authored four books, including the two-volume Welfare and Freedom American Style on the role of the federal government in social welfare provisioning in the United States from 1941 through 1980. He served as editor of the book, Challenges of Aging on US Families: Policy and Practice Implications, in which he also has a chapter 'Inheritance and intergenerational transmission of parental care.' He is also the guest editor for the special issue of Families in Society on social justice, of Marriage & Family Review on challenges of aging on US families, and of the Journal of Sociology & Social Welfare on contemporary history of social policy. Dr. Caputo currently serves on the editorial board of the Journal of Family & Economic Issues, the Journal of Poverty, Families in Society, the Journal of Sociology & Social Welfare, and Marriage & Family Review. He has also published original research on several aspects of social welfare provisioning in the United States in these and other peer-reviewed journals.