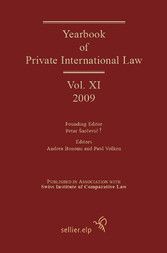 The current rich volume of the Yearbook attempts to strike a balance in the multifaceted expressions of the increasing importance of private international law at national and supranational levels. The vitality of private international law within the European Union is evidenced by both legislative projects and the rich case law of the European Court of Justice. While the European Commission's draft for a Regulation on succession - which probably constitutes the most detailed and ambitious attempt ever to codify PIL in this area - begins its legislative process, a new initiative on the application of foreign law is being considered by the European institutions. Both of these developments are discussed in the Doctrine section. But the newest Yearbook of PIL also examines interesting developments taking place on other continents. For example, the present volume includes a special section focusing on Chinese PIL and reports on the renewed interest with conflict of laws in the U.S. doctrine.