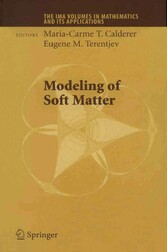 This IMA Volume in Mathematics and its Applications MODELING OF SOFT MATTER contains papers presented at a very successful workshop with the same ti­ tle. The event, which was held on September 27-October 1, 2004, was an integral part of the 2004-2005 IMA Thematic Year on 'Mathematics of Ma­ terials and Macromolecules: Multiple Scales, Disorder, and Singularities. ' We would like to thank Maria-Carme T. Calderer (School of Mathematics, University of Minnesota) and Eugene M. Terentjev (Cavendish Laboratory, University of Cambridge) for their superb role as workshop organizers and editors of the proceedings. We take this opportunity to thank the National Science Foundation for its support of the IMA. Series Editors Douglas N. Arnold, Director of the IMA Arnd Scheel, Deputy Director of the IMA PREFACE The physics of soft matter in particular, focusing on such materials as complex fluids, liquid crystals, elastomers, soft ferroelectrics, foams, gels and particulate systems is an area of intense interest and contemporary study. Soft matter plays a role in a wide variety of important processes and application, as well as in living systems. For example, gel swelling is an essential part of many biological processes such as motility mecha­ nisms in bacteria and the transport and absorption of drugs. Ferroelectrics, liquid crystals, and elastomers are being used to design ever faster switch­ ing devices. Experiments of the last decade have provided a great deal of detailed information on structures and properties of soft matter.