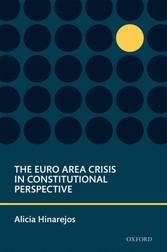 The euro area sovereign debt crisis has been the greatest threat to the euro since its inception, but the consequences of the crisis go well beyond the realm of macroeconomics: the crisis has cast doubt on the viability of a mechanism of integration such as the one envisaged in Economic and Monetary Union (EMU), and on the future of the European Union as a political project in the face of citizens' growing disaffection. The various responses to the crisis have notonly altered the principles underlying EMU, they have also had a profound impact on the constitutional orders of the EU and its Member States. This book focuses on the euro area crisis and its aftermath from a constitutional perspective. It provides a critical analysis of the workings and evolution of Economic and Monetary Union, the changes brought by the crisis and their broader effects, and the constitutional obstacles to integration in this area. Looking forward, it tackles the uncertain future of economic and fiscal integration and the challenges posed. This is a compelling and incisive account of some of the most significantdevelopments and dilemmas facing the European Union since its creation.