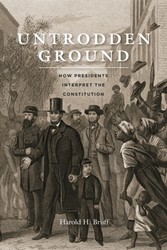 When Thomas Jefferson struck a deal for the Louisiana Purchase in 1803, he knew he was adding a new national power to those specified in the Constitution, but he also believed his actions were in the nation's best interest. His successors would follow his example, setting their own constitutional precedents. Tracing the evolution and expansion of the president's formal power, Untrodden Ground reveals the president to be the nation's most important law interpreter and examines how our commanders-in-chief have shaped the law through their responses to important issues of their time.???????????Reviewing the processes taken by all forty-four presidents to form new legal precedents and the constitutional conventions that have developed as a result, Harold H. Bruff shows that the president is both more and less powerful than many suppose. He explores how presidents have been guided by both their predecessors' and their own interpretations of constitutional text, as well as how they implement policies in ways that statutes do not clearly authorize or forbid. But while executive power has expanded far beyond its original conception, Bruff argues that the modern presidency is appropriately limited by the national political process-their actions are legitimized by the assent of Congress and the American people or rejected through debilitating public outcry, judicial invalidation, reactive legislation, or impeachment. Synthesizing over two hundred years of presidential activity and conflict, this timely book casts new light on executive behavior and the American constitutional system.