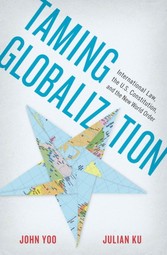 In 1997, a Mexican national named Jose Ernesto Medellin was sentenced to death for raping and murdering two teenage girls in Texas. In 2004, the International Court of Justice ruled that he was entitled to appellate review of his sentence, since the arresting officers had not informed him of his right to seek assistance from the Mexican consulate prior to trial, as prescribed by a treaty ratified by Congress in 1963. In 2008, amid fierce controversy, the U.S. Supreme Court declared that the international ruling had no weight. Medellin subsequently was executed. As Julian Ku and John Yoo show in Taming Globalization, the Medellin case only hints at the legal complications that will embroil American courts in the twenty-first century. Like Medellin, tens of millions of foreign citizens live in the United States, and like the International Court of Justice, dozens of international institutions cast a legal net across the globe, from border commissions to the World Trade Organization. Ku and Yoo argue that all this presents an unavoidable challenge to American constitutional law, particularly the separation of powers between the branches of federal government and between Washington and the states. To reconcile the demands of globalization with a traditional, formal constitutional structure, they write, we must re-conceptualize the Constitution, as Americans did in the early twentieth century, when faced with nationalization. They identify three mediating devices we must embrace: non-self-execution of treaties, recognition of the Presidents power to terminate international agreements and interpret international law, and a reliance on state implementation of international law and agreements. These devices will help us avoid constitutional difficulties while still gaining the benefits of international cooperation. Written by a leading advocate of executive power and a fellow Constitutional scholar, Taming Globalization promises to spark widespread debate.