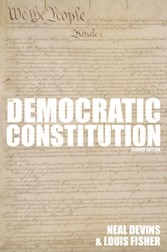 Constitutional law is clearly shaped by judicial actors. But who else contributes? Scholars in the past have recognized that the legislative branch plays a significant role in determining structural issues, such as separation of powers and federalism, but stopped there--claiming that only courts had the independence and expertise to safeguard individual and minority rights. In this readable and engaging narrative, the authors identify the nuts and bolts of the national dialogue and relate succinct examples of how elected officials and the general public often dominate the Supreme Court in defining the Constitutions meaning. Making use of case studies on race, privacy, federalism, war powers, speech, and religion, Devins and Fisher demonstrate how elected officials uphold individual rights in such areas as religious liberty and free speech as well as, and often better than, the courts. This fascinating debunking of judicial supremacy argues that nonjudicial contributions to constitutional interpretation make the Constitution more stable, more consistent with constitutional principles, and more protective of individual and minority rights.