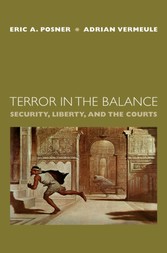 Terror in the Balance: Security, Liberty, and the Courts

Terror in the Balance: Security, Liberty, and the Courts

In Terror in the Balance, Posner and Vermeule take on civil libertarians of both the left and the right, arguing that the government should be given wide latitude to adjust policy and liberties in the times of emergency. They emphasize the virtues of unilateral executive actions and argue for making extensive powers available to the executive as warranted. The judiciary should neither second-guess security policy nor interfere on constitutional grounds. In order to protect citizens, government can and should use any legal instrument that is warranted under ordinary cost-benefit analysis. The value gained from the increase in security will exceed the losses from the decrease in liberty. At a time when the struggle against violent extremism dominates the United States agenda, this important and controversial work will spark discussion in the classroom and intellectual press alike.