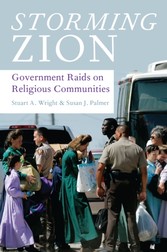 While scholars, media, and the public may be aware of a few extraordinary government raids on religious communities, such as the U.S. federal raid on the Branch Davidians in 1993, very few people are aware of the scope of these raids or the frequency with which they occur. Inspired by the Texas State raid on the Fundamentalist Church of Latter-day Saints in 2008, authors Stuart A. Wright and Susan J. Palmer decided to collect data on all the raids of this kind that have taken place in Western-style democracies over the last six decades. They thus established the first archive of raided groups and then used it see if any patterns could be identified. Their findings were shocking, there were far more raids than expected, and the vast majority of them had occurred since 1990, reflecting a nearly exponential increase. What could account for this sudden and dramatic increase in state control of minority religions? In Storming Zion, Wright and Palmer argue that the increased use of these high-risk and extreme types of enforcement corresponds to expanded organization and initiatives by opponents of unconventional religions. Anti-cult organizations provide strategic frames that define potential conflicts or problems in a given community as inherently dangerous, and construct narratives that draw on stereotypes of child and sexual abuse, brainwashing, and even mass suicide. The targeted group is made to appear more dangerous than it is, resulting in an overreaction by authorities. Wright and Palmer explore the implications of heightened state repression and control of minority religions in an increasingly multicultural, globalized world. At a time of rapidly shifting demographics within Western societies this book cautions against state control of marginalized groups and offers insight into the reasons why the responses to these groups are often so reactionary.