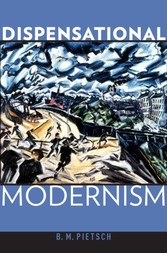 Dispensationalism emerged in the twentieth century as a hugely influential force in American religion and soon became one of Americas most significant religious exports. By the close of the century it had developed into a global religious phenomenon claiming millions of adherents. As the most common form of contemporary prophecy belief, dispensationalism has played a major role in transforming religion, politics, and pop culture in the U.S. and throughout the world. Despite its importance and continuing appeal, scholars often reduce dispensationalism to an anti-modern, apocalyptic, and literalist branch of Protestant fundamentalism. In Dispensational Modernism, B. M. Pietsch argues that, on the contrary, the allure of dispensational thinking can best be understood through the lens of technological modernism. Pietsch shows that between 1870 and 1920 dispensationalism grew out of the popular fascination with applying engineering methods -- such as quantification and classification -- to the interpretation of texts and time. At the heart of this new network of texts, scholars, institutions, and practices was the lightning-rod Bible teacher C. I. Scofield, whose best-selling Scofield Reference Bible became the canonical formulation of dispensational thought. The first book to contextualize dispensationalism in this provocative way, Dispensational Modernism shows how mainstream Protestant clergy of this time developed new scientific methods for interpreting the Bible, and thus new grounds for confidence in religious understandings of time itself.