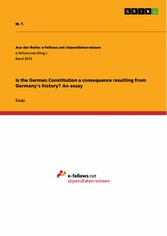 Is the German Constitution a consequence resulting from Germany's history? An essay

Is the German Constitution a consequence resulting from Germany's history? An essay


Essay from the year 2016 in the subject Law - Philosophy, History and Sociology of Law, grade: 82%, 18 Punkte, University of Hull, language: English, abstract: According to the first Article of the German Basic Law (Grundgesetz) human dignity shall be inviolable: 'Die Würde des Menschen ist unantastbar'. The fact that the protection of human dignity is enshrined at the very beginning of the Basic Law emphasises its value and significance. But has it always been like this, or rather, since when did human rights protection gain such importance? It is both interesting and necessary within comparative legal studies to look at laws and their development in various countries since legal history can support the study of comparative law. Especially constitutional issues are relevant as the functioning of a state and human co-existence are based on constitutional principles and values. An analysis of the historic developments permits a better understanding of law in general as well as a critical analysis of one's own domestic legal system. The aim of this essay is to analyse the German constitution and its emphasis on human rights protection in the Federal Constitutional Court (Bundesverfassungsgericht) and to discuss whether it is a consequence resulting from Germany's history. First, this essay will present an overview of Germany's history with particular focus on the period of the Weimar Republic and the National Socialism. In the next section, it will outline the history of origins of the Basic Law as well as its catalogue of fundamental rights, followed by an illustration of the competences of the Federal Constitutional Court in contrast to its predecessors. Finally, a short comparison with regard to the American, French and British Constitution will be drawn.