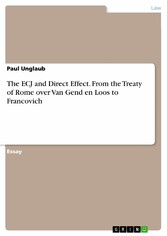 The ECJ and Direct Effect. From the Treaty of Rome over Van Gend en Loos to Francovich

The ECJ and Direct Effect. From the Treaty of Rome over Van Gend en Loos to Francovich


Essay from the year 2015 in the subject Law - European and International Law, Intellectual Properties, grade: 1,45, Edinburgh Napier University (European Law), course: European Law, language: English, abstract: Firstly, this essay will provide some general information regarding the development of the EU. In this context the concept of supremacy will briefly be overviewed, as it is closely related to the doctrine of direct effect. Subsequently, a definition of both direct effect and direct applicability will be administered. Furthermore, the relationship between direct effect and the various Community measures will be examined, focusing then on Directives for reasons which will be explained afterwards. Afterwards, the issues concerning vertical and horizontal direct effect in respect of Directives will be investigated. Finally, the essay will illustrate why and in which cases the doctrines of indirect effect and state liability become applicable. The paper will then conclude by answering the question, referring to the previous remarks, why the European Court of Justice (henceforth, ECJ) introduced the concept of direct effect. The Treaty that established the European Economic Community (EEC) was the Treaty of Rome. It became effective on the 1st of January 1958. This moment can be regarded as a milestone in the development of the European Union. The treaty had not only the objective to prevent the outbreak of a further war between France and Germany but also to bring the Member States of western Europe together in a closer Union by extending the European integration to include general economic cooperation. Over the years, the Member States joined various treaties creating the juridical and political framework, in order to make the Community capable of cooperating on a broad range of matters. The EU organs - such as the Commission, Council, Parliament and the Court - were constituted. In different shape and occurrence, all of the above stated organs are entitled to announce measures (Regulations, Directives and Decisions) which would be targeted to the Member States. In the aftermath of this development two main questions arose. Namely, by what tool would such a measure be exercised towards the Member State(s)? The second and closely linked question was which law would prevail in the not unlikely situation of a dispute between the national law of a Member State and the European rule?