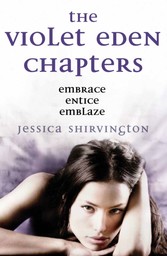 For those who loved Twilight and Fallen comes a new heroine facing impossible choices. A collection of the first three books, Embrace, Entice and Emblaze, in this darkly sexy paranormal romance series.Birthdays aren't Violet Eden's thing. Understandable. It's hard to get excited about the day that marks the anniversary of your mother's death. But this birthday is going to be hard to ignore.Turning seventeen means that Violet will find out she is Grigori - part angel, part human. Her destiny is to protect humans from the vengeance of exiled angels. It all sounds crazy to Violet. Up until this point, all she wanted was to get into art school ... and be with Lincoln. However, it turns out Lincoln carries a secret that could tear them apart. And then she meets Phoenix - intense, enigmatic and, it seems, always there for her. Caught up in a battle between light and dark, Violet Eden will have to decide how much she's willing to sacrifice. And who exactly she should trust. Jessica Shirvington's action-packed paranormal romance series, The Violet Eden Chapters, has been sold around the world. Jessica lives in Sydney with her husband, former Olympic sprinter Matt Shirvington, and their two daughters.For more information visit Jessica's website jessicashirvington.com, her Facebook page on facebook.com/Shirvington, or follow her on Twitter on twitter.com/JessShirvington.The Violet Eden ChaptersEmpowerEmbraceEndlessEmblazeEntice