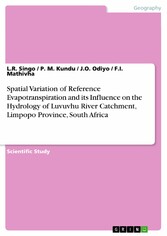 Spatial Variation of Reference Evapotranspiration and its Influence on the Hydrology of Luvuvhu River Catchment, Limpopo Province, South Africa

Spatial Variation of Reference Evapotranspiration and its Influence on the Hydrology of Luvuvhu River Catchment, Limpopo Province, South Africa


Scientific Study from the year 2016 in the subject Geography / Earth Science - Meteorology, Aeronomy, Climatology, , language: English, abstract: Evapotranspiration (ET) is regarded as the largest mode of water loss in arid and semi-arid areas and is critical for accurate predictions of water exchange and crop productivity. Analysis of spatial and temporal fluctuations of evapotranspiration is therefore crucial to understand the coupled water and energy cycles in arid and semi-arid environments. This study estimated reference evapotranspiration (ETo) to study its influence on the hydrology of Luvuvhu River Catchment using a physically based model. The ETo plays a key role in irrigation systems design, water management under irrigated and rainfed production. The Penman-Monteith equation which is widely used in water resource management and planning was used to estimate ETo. Simulation of ETo was performed using CROPWAT 8.0 software. This algorithm is useful in simulating water resource management scenarios at different spatial and temporal scales under a wide range of environmental conditions. To understand the impact of climatic characteristics in the formulation of evapotranspiration model, seasonal variation of different meteorological parameters such as wind speed, solar radiation, temperature and humidity was analysed. Results showed the spatial and temporal distribution of ETo for different climatic stations in the study area with peaks in summer months. Minimum values of ETo were observed during the dry months. Results from the simulations showed that the areas with higher ETo values were near rivers and streams, which generally have more abundant vegetation. Areas with low ETo values were relatively dry, where pasture and grasslands dominated the landscape. Correlation results showed that no relationship exists between stream flow and ETo (r = 0.36) in the study area, hence, a significant relationship exists between rainfall and ETo (r = 0.86). The study recommends the use of CROPWAT model for computing ETo under arid and semi-arid climatic conditions for water resource management and planning.