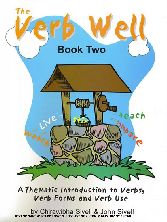 The design of this book

The Verb Well three-book series offers a carefully crafted set of verb-vocabulary materials to cover 450 frequent and useful verbs, 150 verbs per book. Each book in the reproducible series presents thirty easy-to-learn clusters of five verbs each, with each cluster organized according to meaning. Some share a common activity or setting e.g. ""Garden"": dig - harvest - plant - rake - water. Others are governed by a key concept e.g. ""Competition"": compete - attack - fight - struggle - race. Either way, the organization has a thesaurus-like quality, in that the verbs always appear in a context created through inclusion of other related terms.

This organizational plan has two important advantages. First of all, it helps students experience success with the crucial vocabulary-learning strategy of consistently grouping new words to be learned around an easily recalled center of meaning. Such an approach facilitates visualization, verbal-association, chaining, and other familiar memory-enhancement techniques that can definitely promote vocabulary learning. Secondly, the structure of the book is designed to underline the necessity of recognizing and mastering distinctions between words that may be generally similar in meaning but that cannot be substituted for each other.

Thus, for instance, the ""Etiquette"" group includes both insult and snub, and the ""Liquids"" group includes pour, spill, and sprinkle. Introducing this fairly simple but nonetheless eye-opening level of semantic subtlety helps overcome learners' common tendency to take a one-word-fits-all approach to vocabulary learning, that short-sighted expedient can lead to learning just very general expressions which are then over-used and overextended to the detriment of precision and flexibility.

The verbs presented in the Verb Well series were chosen for frequency and utility. Three major word-frequency lists were consulted: West's A General Service List of English Words (London: Longman, 1953, rep. 1983), Kucera and Francis' Computational Analysis of Present-Day American English (Providence, Rhode Island: Brown University Press, 1967), and Carroll, Davies and Richman's The American Heritage Word Frequency Book (New York: American Heritage Publishing Company, 1971). A methodical computer analysis was carried out to determine which verbs tended to appear among the more frequent items on those lists, and from that selection related items were assembled to form the core of each cluster, sometimes along with a few other high-utility verbs to round out the group.

Of course, verbs make up only a part of the total word-store of any speaker, so that a selection of 450 verbs as in the entire three-book series represents a sub-set of a quite extensive vocabulary. Nevertheless, conscientious attention to frequency and utility has made it possible to bring together a very convincing and practical survey of verbs that really are worth either reviewing or learning from scratch."