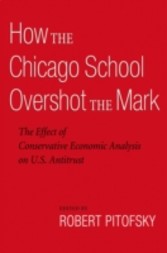 How the Chicago School Overshot the Mark is about the rise and recent fall of American antitrust. It is a collection of 15 essays, almost all expressing a deep concern that conservative economic analysis is leading judges and enforcement officials toward an approach that will ultimately harm consumer welfare. For the past 40 years or so, U.S. antitrust has been dominated intellectually by an unusually conservative style of economic analysis. Its advocates, often referred to as ",The Chicago School,", argue that the free market (better than any unelected band of regulators) can do a better job of achieving efficiency and encouraging innovation than intrusive regulation. The cutting edge of Chicago School doctrine originated in academia and was popularized in books by brilliant and innovative law professors like Robert Bork and Richard Posner. Oddly, a response to that kind of conservative doctrine may be put together through collections of scores of articles but until now cannot be found in any one book. This collection of essays is designed in part to remedy that situation. The chapters in this book were written by academics, former law enforcers, private sector defense lawyers, Republicans and Democrats, representatives of the left, right and center. Virtually all agree that antitrust enforcement today is better as a result of conservative analysis, but virtually all also agree that there have been examples of extreme interpretations and misinterpretations of conservative economic theory that have led American antitrust in the wrong direction. The problem is not with conservative economic analysis but with those portions of that analysis that have ",overshot the mark", producing an enforcement approach that is exceptionally generous to the private sector. If the scores of practices that traditionally have been regarded as anticompetitive are ignored, or not subjected to vigorous enforcement, prices will be higher, quality of products lower, and innovation diminished. In the end consumers will pay.