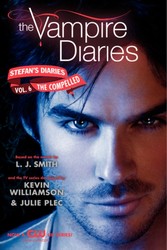 Control or be controlled . . .Stefan and Damon thought they knew evil. But nothing compares to Samuel, the ruthless vampire hell-bent on avenging Katherine's death by destroying the Salvatore brothers.Reeling from Samuel's latest attack, Stefan and Damon find help in the most unlikely of placesa secret coven of witches. Together they discover Samuel's plan is more sinister than they ever could have imagined. Their only hope is to stop him before he secures the power to control humans and vampires alike. If they fail, not only Stefan and Damon but all of London will fall victim to Samuel's spell.Based on the popular CW TV show inspired by the bestselling novels, Stefan's Diaries reveals the truth about what really happened between Stefan, Damon, and Katherineand how the Vampire Diaries love triangle began.