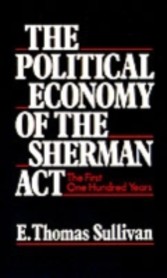 This book examines the legislative history and the political economy of the Sherman Antitrust Act--the main federal statute that regulates economic activity in the United States. Tracing the evolution of the antitrust movement in the United States since 1890, this collection of essays examines the role of government in regulating markets, and the balance it and its critics seek between the goal of limited government and the protection of free, open and competitive markets, With markets today being more international in nature and the world economy being globalized, Americans need to rethink how laws have defined markets and the implications for international transactions. Given the recent changes in Europe, this book has a significant contribution to make to the intellectual understanding of antitrust laws impact on American business here and abroad, on the European Economic Community (EEC) as it creates a single market by 1992, and on Eastern Europe as it moves to a market economy.