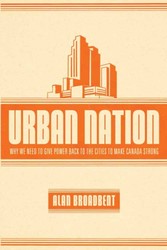 Canadas cities are crippled by a lack of financial and governing clout. Their infrastructures are crumbling and their citizens are disaffected by the inability of municipal governmentor any government, for that matterto act on the issues that influence their constituents lives. Cities generate a disproportionate amount of Canadas wealth and are home to the majority of the population, yet they have no means to control their own destinies. Alan Broadbent suggests that the problem is a slavish devotion to a constitutional structure and a federal government that is ignorant of how crucial large cities are to our national prosperity and heritage. Canadas landscape has been changed by the forces of urbanization and immigration. If the country is to prosper, Broadbent argues, cities must be given the same amount of power as their federal and provincial counterparts. Thoughtful and provocative, Urban Nation ignites controversy among politicians and passion among citizens and action groups eager for practical urban reform solutions.