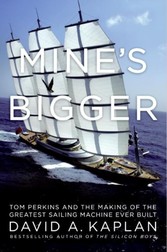 As the dominant venture capitalist of Silicon Valley, Tom Perkins had seemingly done it allfrom amassing a billion-dollar fortune to getting himself convicted of manslaughter in France. But his ultimate dream was to create the biggest, fastest, riskiest, highest-tech, most self-indulgent sailboat ever built.With keen storytelling and biting wit, bestselling author David A. Kaplan takes us inside the mind of an American genius and behind the scenes of an extraordinary venture: the birth of Perkins's $130 million marvel The Maltese Falcon. This modern clipper ship is as long as a football field and forty-two feet wide, with three rotating masts, each twenty stories high, and a bridge straight out of Star Trek. The riveting biography of a remarkable ship and the remarkable man who built it, Mine's Bigger is an unforgettable profile of ambition, hubris, audacity, and the imagination of a legendary entrepreneur.