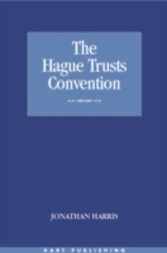 Trusts cross borders. When they do,real difficulties may arise. Will the understanding of what a trust is be different in a foreign state? Will the rights, powers and duties of the trustee and settlor be the same? What rights will the beneficiary be able to assert? To what extent will the trust assets be safe from the claims of creditors, forced heirs, or third parties? Which legal system will be applied to the trust? Within what limits? What if the trust needs to be recognised in a state which does not have the institution of the trust in its domestic law? The Hague Trusts Convention, enacted into English law by the Recognition of Trusts Act 1987, seeks to ameliorate the situation by providing harmonised choice of law rules for 'trusts created voluntarily and evidenced in writing.' It also provides for the recognition of trusts in Contracting States. Those Contracting States should recognise the trust, even if they do not have the institution in their domestic law. This book is the first published in England to devote itself to a detailed analysis of the Convention. It is aimed at academics and practitioners, at private international lawyers and at trust lawyers. Frequent reference is made to the position in civil law states (especially in the Contracting States of Italy and the Netherlands) and in other trust states, both offshore and onshore. The Hague Trusts Convention deals with the operation of the trust itself. It does not deal with the preliminary steps needed to create a trust. These preliminary matters raise highly complex and uncharted choice of law issues. Detailed discussion of these matters is also provided, and appropriate solutions suggested.