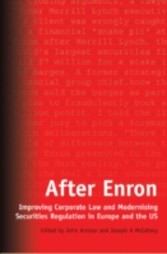 At the end of the twentieth century it was thought by many that the Anglo-American system of corporate governance was performing effectively and some observers claimed to see an international trend towards convergence around this model. There can be no denying that the recent corporate governance crisis in the US has caused many to question their faith in this view. This collection of essays provides a comprehensive attempt to answer the following questions: firstly, what went wrong - when and why do markets misprice the value of firms, and what was wrong with the incentives set by Enron? Secondly, what has been done in response, and how well will it work - including essays on the Sarbanes-Oxley Act in the US, UK company law reform and European company law and auditor liability reform, along with a consideration of corporate governance reforms in historical perspective. Three approaches emerge. The first two share the premise that the system is fundamentally sound, but part ways over whether a regulatory response is required. The third view, in contrast, argues that the various scandals demonstrate fundamental weaknesses in the Anglo-American system itself, which cannot hope to be repaired by the sort of reforms that have taken place. ",This collection of papers by leading US and European corporate law scholars provides fresh and rigorous analyses of the recent corporate governance scandals and the strategies devised by regulators to guard against future governance failures.",Randall Thomas, John Beasley Professor of Law and Business, Vanderbilt University School of Law, Vanderbilt University.