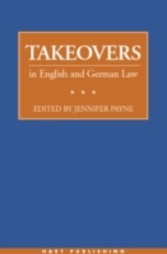 Takeovers in English and German Law

Takeovers in English and German Law

This book arises out of the second Anglo-German Law Conference in Oxford,held under the auspices of the Oxford Law Faculty and with the support of two leading law firms. The law regarding takeovers has recently taken on a new dimension in Europe, and nowhere more so than in England and Germany. These two jurisdictions have had to consider a number of issues, including the ramifications of the Vodafone/Mannesmann takeover, the proposed Takeover Act in Germany, and the impact of the Financial Services and Markets Act 2000 in England. This collection examines the law regarding takeovers in England and Germany, taking account of these new developments, among others. It also deals specifically with the issues arising from cross-border mergers between the two jurisdictions. This collection will be indispensable to practising lawyers and in-house counsel whose practice touches on Anglo-German business affairs. It will also be of real interest to legal academics in this field.