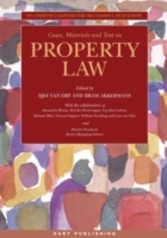 This casebook presents a deep comparative analysis of property law systems in Europe (ie the law of immovables, movables and claims), offering signposts and stepping stones for the reader wishing to explore this fascinating area. The subject matter is explained with careful attention given to its history, foundations, thought-patterns, underlying principles and basic concepts. The casebook focuses on uncovering differences and similarities between Europe's major legal systems: French, German, Dutch and English law are examined, while Austrian and Belgian law are also touched upon. The book combines excerpts from primary source materials (case law and legislation) and from doctrine and soft law. In doing so it presents a faithful picture of the systems concerned.Separate chapters deal with the various types of property rights, their creation, transfer and destruction, with security rights (such as mortgages, pledges, retention of title) as well as with harmonising and unifying efforts at the EU and global level. Through the functional approach taken by the Ius Commune Casebooks this volume clearly demonstrates that traditional comparative insights no longer hold. The law of property used to be regarded as a product of historical developments and political ideology, which were considered to be almost set in stone and assumed to render any substantial form of harmonisation or approximation very unlikely. Even experienced comparative lawyers considered the divide between common law and civil law to be so deep that no common ground - so it was thought - could be found. However economic integration, in particular integration of financial markets and freedom of establishment, has led to the integration of particular areas of property law such as mortgage law and enforceable security instruments (eg retention of title). This pressure towards integration has led comparative lawyers to refocus their interest from contract, tort and unjustified enrichment to property law and delve beneath its surface.This book reveals that today property law systems are closer to one another than previously assumed, that common ground can be found and that differences can be analysed in a new light to enable comparison and further the development of property law in Europe.