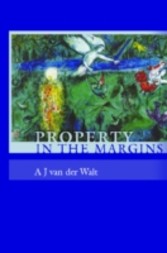 Property in the Margins

Property in the Margins

Having its origins in the process of transformation and land reform that began to take shape in South Africa at the end of the last century, this strikingly original analysis of property starts from deep inside the property regime and not from a distant or abstract perspective on property rules and practices. Focusing on issues of stability and change in a transformative setting and on the role of tradition and legal culture in that context, the book argues that a property regime, including the system of property holdings and the rules and practices that entrench and protect them, tends to insulate itself against change through the security- and stability-seeking tendency of tradition and legal culture, including the deep assumptions about security and stability embedded in the rights paradigm, rhetoric and logic that dominate current legal culture. The rights paradigm tends to stabilise the current distribution of property holdings by securing extant property holdings on the assumption that they are lawfully acquired, socially important and politically and morally legitimate. This function of the rights paradigm tends to resist or minimise change, including change brought about by morally, politically and legally legitimate and authorised reform or transformation efforts. The author's goal is to gauge the lasting power of the rights paradigm by investigating its effects in the margins of property law and of society, by establishing the actual efficacy and power of reformist or transformative anti-eviction policies and legislation aimed at the protection of marginalised and weak land users and occupiers in areas such as landlord-tenant law, eviction of unlawful occupiers of land and other restrictions on the landowner's power to enforce a stronger right to exclusive possession. Ultimately the book's aim is to explore the possibility of opening up theoretical space where justice-inspired changes to (or transformation of) the extant property regime can be imagined and discussed more or less fruitfully from an unusual perspective, a perspective from the margins which is valuable for any theoretical consideration or discussion of property.