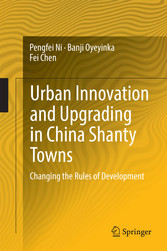 By using field survey and World Bank investment project evaluation method, this book investigates the experience of slum rebuilding in Liaoning province, China. It figures out that the experience of Liaoning province is relatively successful and can be of great significance for developing countries and regions. The issue of slums is a huge challenge in the process of global urbanization. The population living in slums is 0.8 billion worldwide and the number is still growing. International organizations (e.g., the World Bank) and relevant countries have been working on the rebuilding of slums but only a few succeeded. In recent years, since some scholars believe that government should play dominant role in slums rebuilding, Liaoning province has developed a systematical model in slums rebuilding from 2005. This model emphasizes the guidance of government, market functions and society involvement. With the application of the new model, Liaoning province has improved 2.11 million people's living conditions from 2005 to 2010. By introducing the conditions, history, rebuilding process and rebuilding methods of Liaoning slums, this book provides new information and data for slum rebuilding decision makers and researchers.