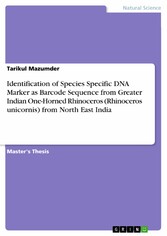 Master's Thesis from the year 2014 in the subject Biology - Geobiology, Assam University, language: English, abstract: The North East India is a reservoir of rich biodiversity for much of India's flora and fauna, and as a consequence, the region is one of the richest in biological values. DNA based species identification or DNA barcoding is an exciting tool for documenting biodiversity with a gene sequence. Here we focused on the development of DNA barcode sequence of Greater Indian one-horned Rhinoceros [Rhinoceros unicornis] by determining the DNA sequence of its mitochondrial 5´ COI gene region using cross primer design for PCR amplification. The cross species primer pairs of forward primer fish [FISH COX F] and reverse primer invertebrate [INV R] DNA barcoding, successfully amplified the barcode sequence of R. unicornis which is confirmed through similarity search in National Centre for Biotechnology [NCBI, www.ncbi.nlm.nih.gov] and Barcode of life [BOLD] database and submitted to NCBI-GenBank with accession no. JN417004 is the first COI barcode sequence of R. unicornis of Greater Indian one-horned Rhino. We observed the maximum identification of the query sequence in case of R. unicornis (99%) and R. sondaicus (93%). Mean pair wise distance was computed using K2P to check the inter species divergence between all species in each genus among the members of Rhinoceretidae family in COI region taking 632 bp into consideration, within species was found to be 0.002 as the maximum and 0.000 as the minimum and that of in between species was found to be 0.064 as the maximum and 0.000 as the minimum. The study represents development of COI species specific DNA barcode of R. unicornis with regard to conservation and trade aspect. The cross species primer pair to amplify barcode gene for a species for which no specific primer are available represents a noble approach for barcoding on those areas like North East India where biological diversity is high.