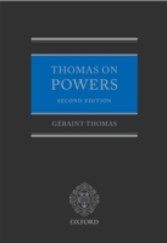 Highly regarded, and cited in a number of judgments, Thomas on Powers is concerned with the general principles and doctrines governing or affecting the creation, exercise, and operation of powers in private law, and provides a discursive, intellectual analysis of the principles underlying the problems commonly encountered by practitioners. The first edition of Thomas on Powers was published in 1998 as part of Sweet & Maxwell's Property and ConveyancingLibrary. This new edition both updates the original work and expands the scope of the book significantly to include coverage of offshore trusts and current trusts issues such as fiduciary powers, protectors, and ",shams",. Thomas on Powers provides extensive coverage of recent statutes dealing with trustee delegation, developments to the law relating to pension schemes, and cases relating to the rule in Hastings-Bass, which has had a series of contentious recent decisions. This edition includes expanded discussion of case law from Commonwealth countries and focuses more on the numerous judgments from offshore jurisdictions, some of which raise novel questions and issues. The book also includes anincreased emphasis on the specific legislation of offshore trusts, where practical problems centred around the creation and exercise of trustee powers have become very important. This edition covers the problematic interaction of powers of revocation and sham trusts, the scope and effects of powers of amendment,the powers and role of protectors of offshore trusts, and the powers of directors of companies, and the relationship between fiduciary powers in private law and powers exercised by public bodies.