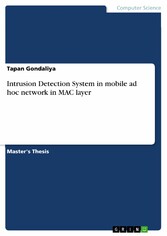 Master's Thesis from the year 2013 in the subject Computer Science - IT-Security, grade: C, Lovely Professional University, Punjab (School Of Computer Science and Engineering), course: M.Tech(CSE), language: English, abstract: The rapid proliferation of Mobile ad hoc network has changed the landscape of network security. The recent DOS attacks on major Internet sites have shown us, no open computer network is immune from intrusions. The ad-hoc network is particularly vulnerable due to its features of open medium, dynamic changing topology and cooperative algorithms, lack of centralized monitoring and management point and lack of a clear line of defense. The traditional way of protecting networks with firewalls and encryption software is no longer sufficient and effective. There are many intrusion detection techniques have been developed on Ad hoc network but have been turned to be inapplicable in this new environment. Here we need to search for new architecture and mechanisms to protect Mobile Ad hoc network. In the above all technique of intrusion detection is applied on the only one layer and that is probably on routing layer. But here we apply this intrusion detection system in the MAC layer for the more security, efficiency and high speed compare to other technique those whose apply in the network layer.