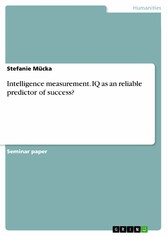 Intelligence measurement. IQ as an reliable predictor of success?

Intelligence measurement. IQ as an reliable predictor of success?

Seminar paper from the year 2014 in the subject Psychology - Learning Psychology, Intelligence Research, grade: A, , language: English, abstract: This essay investigated the research question: To what extent is a person's IQ a reliable predictor of success in life? It was essential to primarily discuss the definition of intelligence in relation to IQ with reference on its impact on success in life, whereby it was revealed that even amongst psychologists there is no agreed standard characterization of intelligence in humans as well as there is no consistent perception of success. As intelligence measurement is such a disputed yet highly important psychometric paradigm to determine the future potential of an individual, this investigation analyses both supportive as well as critical views towards the IQ in terms of its reliability in predicting academic, professional, financial and social success while simultaneously considering its weaknesses and limitations. The investigation of studies concerning the correlation of IQ and a likely college graduation or IQ and financial success has shown that IQ can in a certain way be predictive of success in life. However, the analysis of research that puts the predictive value of the IQ in a questionable position suggests that intelligence is not only context dependent and influenced by personality, but can also be expressed in different ways. Hence it seems justifiable that multiple forms of intelligences exist what proves the IQ to be a too one sided measurement of intelligence as it does not regard human personality and behavior as a whole. In conclusion, the intelligence measured by IQ tests is a fairly accurate predictor of objective success in terms of academics and professional achievements. However, there is an individual sense of self-fulfillment which always relies on personal traits and motivation, hence the predictive validity should not be overestimated and regarded as the ultimate indicator of future success.