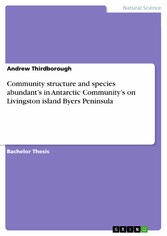 Bachelor Thesis from the year 2011 in the subject Biology - Geobiology, University of Hull (Centre for Environmental and Marine Sciences), course: Coastal Marine Biology, language: English, abstract: This study was carried out in the lab to identify species that were collected from three sites (Cape Smellie, Past Clark and Nunatak) on Byers peninsula, Livingston Island South Shetland Islands. The study was to investigate whether the length of time a site had been ice free affected community structure. It was found that Cape Smellie had the highest species richness with sixteen more species than Past Clark and twenty-nine more species than Nunatak. Cape Smellie also had the highest of species and was the site that had been ice free for the longest time period +50 years and the Nunatak samples showed a higher diversity than the other two site samples and is the site that has been ice free for less than 10 years. All of the sites sampled were found to have high numbers of Laevilltorina calignosa, Donacidae, Spinonid, Plathyhelminthe and Amphipods, all of which are highly adaptive species to different stress gradients and are all found worldwide in different types of ecosystems. The main findings in this study suggest that glacial retreat could be a possible cause for the increase in species as the data shows that glacial retreat over time co-insides with the increase in species abundant richness and diversity found on the different sites. There is a good possibility that there are different stages of colonisation by different species being seen in this study, and that location of the sites and the different stress gradients, substrata and exposure are possible controlling factors in the type of species and their found at the different sites. All three study sites had ten of the same species present; amphipods two, three, four, six, and nine, Terrebellida, Nephtyidae, Donacidae, Plathyhelminthe one and two and Enchytraeidae, but as likely, the substrata and different stress gradients i.e. wave intensity tolerance to freezing, the dominant species found on the study sites at Byers peninsula also correspond with the majority of studies carried out on other islands in and around the Antarctic region.